The Hórreos throw the times

The Hórreos de Valdeón are age old granaries although now a days they do not store any food. What they do hold is an impressionable antiquity and a quaint beauty which captivates its onlookers.

The Valdeón Valley is home to 83 hórreos which vary in structure. Their peculiar architecture, like the materials used to construct them, are reminiscent of age old times.

These buildings are so archaic that the ancient roman scholar, Marco Terencio Varrón (116-27 BC) commented on them as early as the first century in his works. He wrote:

“Others construct granaries suspended above the ground in their fields, not unlike those in eastern Spain and some parts of south east Italy. These granaries are ventilated not only by the air that penetrates them laterally through the windows, but also by the air which flows underneath them.”

The fight against rodents

A granary is a building meant for storing and preserving food in dry conditions. It also keeps food out of the reach of animals (particularly rats and other rodents).

They are usually found in the north of Spain and Portugal, in regions where the early arrival of a long, cold and wet winter means that crops must be harvested early.

The style of the Hórreos in the Valdeón Valley offers new designs. For example, some granaries have more than the one conventional door, and others were built with windows. 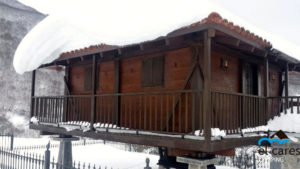 Currently in Santa Marina de Valdeón there are eleven granaries, mainly made with wooden stilts and cloth covered gabled (two sided) roofs. However, some roofs

There is also a granary-come-apartment which has been refurbished to cater for guests, complete with everything to the smallest of details and is perfect for a romantic evening.

There are a further fourteen hórreos in Prada, one of which has recently undergone reconstruction.

With sixteen Spanish granaries, Soto is the town with the most hórreos in the whole region. The most striking character of the hórreos in Soto de Valdeón is their age as two of them are amongst the oldest constructions in the mountains.

Los Llanos boasts twelve hórreos. Three of which have the same distinctiveness. They all use a mixture of cement and asbestos to make the roof.

And finally, Caín has just one hórreo.

Structurally speaking, they are elevated above the ground by ‘pegollos’, which are essentially upright square pillars.

The pegollos rest on bases, stones which protect the pillars from coming in to contact with water on the floor. ‘Torna-ratos’ rest on the tops of the pegollos. They are flat stones which prevent rats and other animals from climbing up in to the granary.

Some hórreos have more than one door, which implies that there were interior walls to separate the granary in the past.

The hórreos are accessible by a set of stairs, which do not fully reach the height of the granary. They stop fifty centimetres short to prevent the access of rodents and other pests.

A living museum, the challenge of keeping it

Even though it wouldn’t be a very practical building today, you have to appreciate the efforts of the Valdeón residents in preserving the hórreos in such good condition. 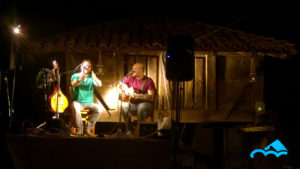