Valdeón is full of hidden wonders.

The southern-most slope of the Picos Mountains is directly north of the Province of León. The slope is the starting point of the River Sella and is one of the world’s best conserved natural areas. The mountainside has a ‘villagey feel’ and exudes a natural rawness which give a truly authentic experience to those who adore mountain life.

The Valdeón Valley preserves the sheer essence of unspoilt nature by being cocooned within the Picos de Europa National Park. Also, due to its remote location, the Valley only tends to attract the most fearless of adventurers in search of remarkable encounters.

Many people come to Valdeón to relax and look for inspiration. The Valley’s rural areas are rife with adventure, all of which infatuate its visitors with their own unique charms. Its intricate geography makes every spot a viewpoint for the spectacular countryside.

The Valley is home to eight villages which are scattered among the many mountains in the region. However despite the area’s harsh terrain, life has managed to survive and develop over the last few centuries and exists today in the form of this handful of small settlements which have shaped the area’s history.

Small dwellings made of wood and stone, beautifully constructed, are reminiscent of type of architecture which was designed to be hardy and durable. The dwellings, as well as Hórreos (a style of granary unique to the Valdeón Valley), mills and quaint bridges bestow an almost fairy-tale atmosphere upon these dainty villages.

The valley is exists in the gorge created by the two most spectacular peaks in the region: the Urrieles and the Cornión. The Valdeón villages are mostly dotted along the waters of the River Cares which birth life in to nearby arcane pastures. The enclaves are buried deep within the heart of Picos de Europa, enshrouded by dense beech forests, meaning that they are not only astonishing places to visit, but they also offer an invaluable base to embark on local hiking routes. 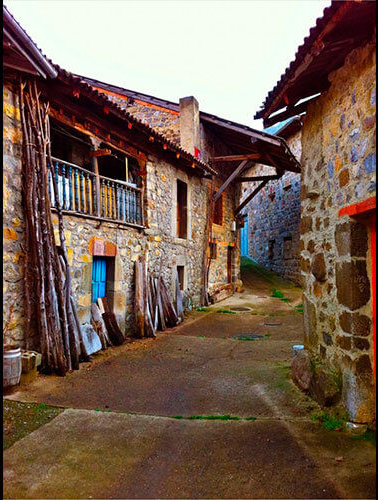 Soto de Valdeón is a place which is more than worthy of a visit. Soto is a village famed for its church, San Pedro Church. Built circa 16th century, the church is an example of divine architecture as its roof exhibits an awe inspiring stone ribbed vault interior coupled with a renaissance altarpiece. Aswell as impressive architecture, it is also known for the decorated shrine dedicated to the Virgin Mary which sits on display within its walls. Similar to Soto de Valdeón, another village called Posada de Valdeón also houses an archaic church (circa XVI/XVII century) which is dedicated to Santa Eulalia.

On the banks of the River Cares stands another small village: Cordiñanes. It is the closest settlement to the El Barrejo archaeological site. In 1995 an archaeological dig was commissioned revealing a medieval graveyard complete with gravestones and limestone blocks which time seemed to have forgotten. Further downstream the shrine of the Virgen de Corona is found, the patron saint of the Valdéon Valley. According to legend, King Don Pelayo was crowned in this sacred and holy place.

Other settlements such as Valdeón, Prada, Caldevilla, Los Llanos and Caín are also well worth a visit, the latter being the village which guards the famous Cares Route. 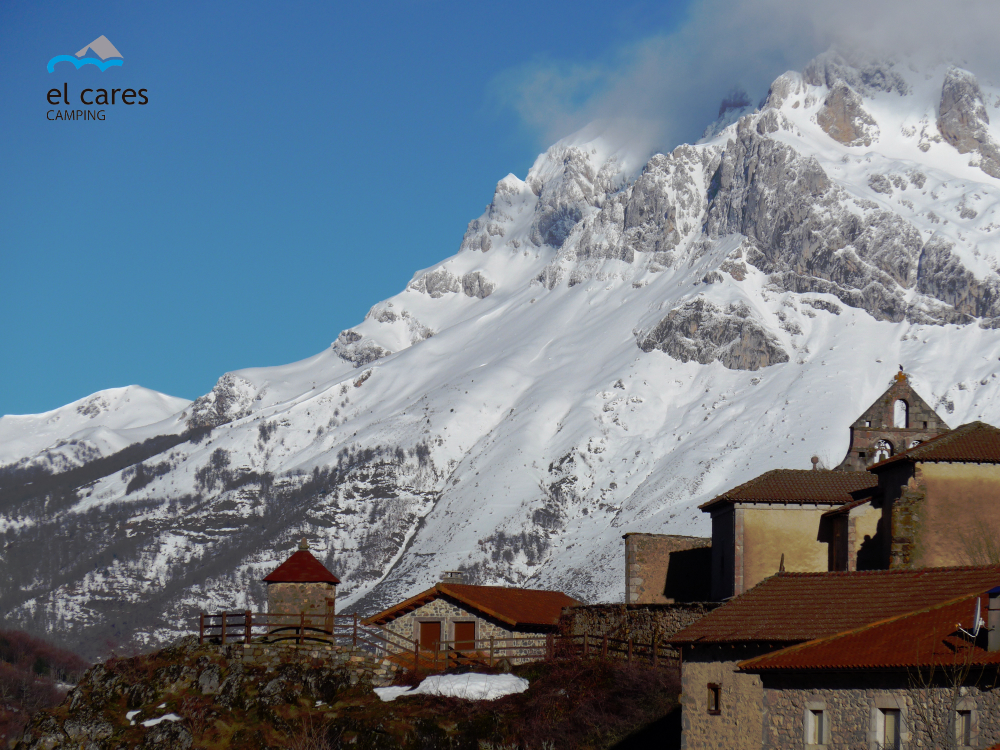 Santa Marina de Valdeón is where you will find our hidden Campsite. A charming mountainous hamlet whose ancestors were pivotal in the foundation of the local monastery. Interestingly, King Alfonso VI granted certain special privileges to the monastery’s abbot in 1081 and so now it is considered to be the earliest inhabited area within the whole valley. 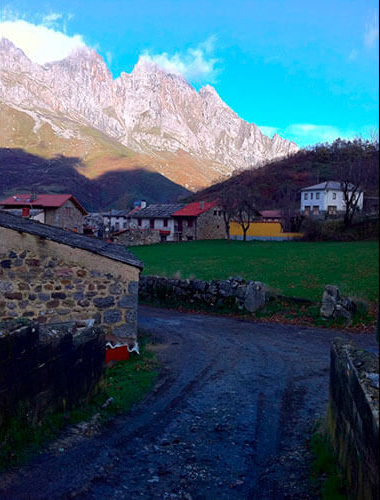 Throughout history, the communal agricultural system used in the valley ensured that neighbouring villages endured the harshest of winter conditions. Their inhabitants, honest and hardworking, were shaped and altered by natural selection, with only the hardiest surviving. Nowadays, circumstances have changed for residents and they now enjoy certain freedoms which their ancestors could have only dreamt of. Due to this, the price of living in these pristine villages have sky rocketed in past years. By listening to the adventures and stories that these people have to tell, as well as plunging yourself in to their culture and traditions, will transport you back hundreds of years to a simpler, more humble time. 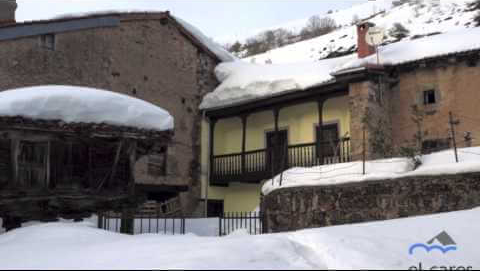 A great way to fully immerse yourself in the valley’s customs and traditions is through food. Sampling local delicacies such as local Valdeón cheese, famed for its rich flavour, coupled with the distinct aroma of Bierzo wine. And what a better place to try such foods as you can marvel at the Picos summits and their neighbouring dense forests as you eat. Experiences like this stimulate our senses and evoke emotions of pure accordance with the Valley. Come and drink from the fountains of our folk wisdom in an untouched, legendary landscape. It’s an unforgettable experience.

The wolf hunt: a question of survival.

Many years ago, when packs of wolves were abundant in the mountains, the inhabitants of Valdeón used to hunt them down with spears and stones. It was their duty to defend the safety of the valley by attacking wolf-packs without fear nor cowardice. These now outdated practices served to control the wolf population in order to lower the risk of the wolves attacking livestock.

Ingrained so much in the way of life, there was a local obligation for males of a certain age to take part in these wolf hunts. The hunters were advantaged by an ingenious tactical structure which was essentially a man-made wolf killing alley which drove the beasts towards a pit at the end called El Chorco de los Lobos. The country folk hid along the alleyway in pointed wooden structures and would attack wolves with makeshift spears as they ran past. This would scare the wolves, forcing them to fall in to the pits where they would meet their end.

The Chapel of Corona: How legend tells it.

The feast days of the Virgen de la Corona are recognised to be of provincial tourist interest. Events are held on each of the feast days and you will definitely not want to miss them. The days start with a procession of a statue of the Virgin de la Corona, accompanied with Spanish bagpipes.

The chapel faces opposite the Chorco de los Lobos between Cordiñanes and Caín and its history is clouded by legend. One of those legends tells a story of King Don Pelayo, who at the time was fleeing from Córdoba because he did not agree with the marriage of his sister and the Berber governor, took shelter in the chapel and its surrounding area. During his stay in the region, he led the residents to rebel against the Muslim general Al Qama in the year 722.

The Cares Route, a well-guarded treasure.

This amazing hiking route was once the access route for maintenance workers working on power lines and the hydroelectric power station.

The River Cares has shaped the Valley over millennia with its rushing waters. Now, the once watery path carved through the valley is now the setting for some of the most beautiful and accessible hiking routes in Picos de Europa National Park. Caín is where the unique Cares route begins with a path carved in limestone rock. Tunnels, ledges and bridges are just some of the forms taken by the route as it zigzags between mountains until it finally reaches Poncebos. 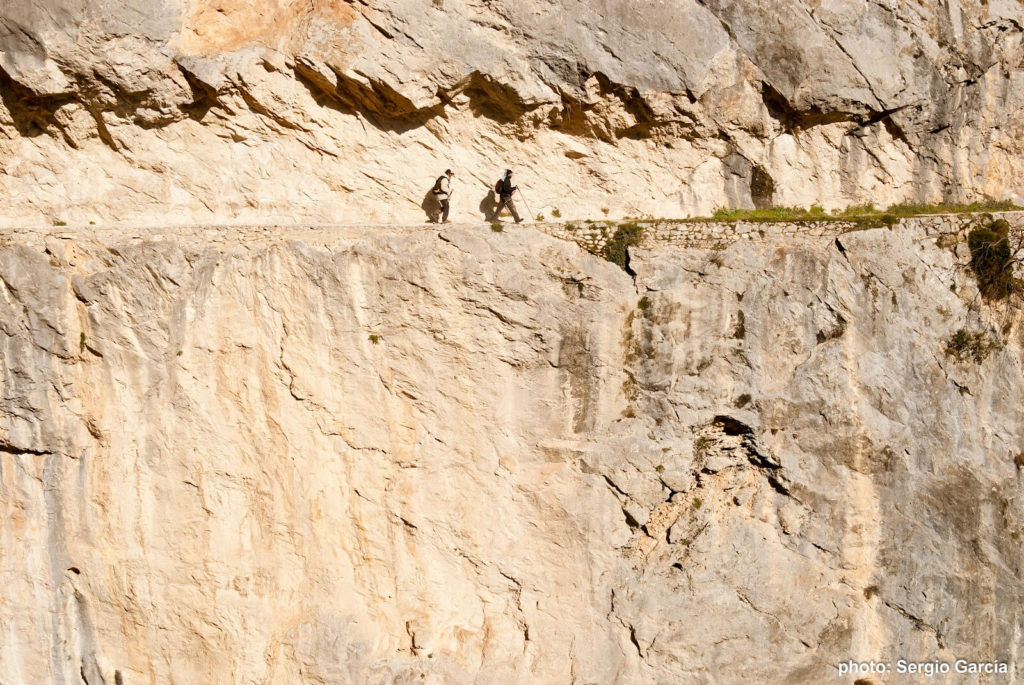 Despite being relatively long, 12 kilometres to be exact, the route is actually quite flat. It is only when you arrive at Los Collados when the path takes on more hills and becomes a bit more of a challenge. For this reason, when our team of biologists explain the range of activities on offer at Camping el Cares, we can help you to plan a more straightforward and easier hiking route, without missing out on all the wonderful sightseeing.

Camping with your dog. Tips for a dream holiday.